Geb was the Egyptian god of the Earth and later a member of the Ennead of Heliopolis. He had a viper around his head and was thus also considered the father of snakes. It was believed in ancient Egypt that Geb’s laughter created earthquakes and that he allowed crops to grow. The oldest representation in a fragmentary relief of the god, was as an anthropomorphic bearded being accompanied by his name. In later times he could also be depicted as a ram, a bull, or a crocodile.

In mythology, Geb also often occurs as a primeval divine king of Egypt from whom his son Osiris and his grandson Horus inherited the land after many contests with the disruptive god Set, brother, and killer of Osiris. Geb could also be regarded as personified fertile earth and barren desert, the latter containing the dead or setting them free from their tombs, metaphorically described as “Geb opening his jaws”.

In the Heliopolitan Ennead (a group of nine gods created in the beginning by the one god Atum or Ra), Geb is the husband of Nut, the sky or visible daytime and nightly firmament, the son of the earlier primordial elements Tefnut (moisture) and Shu (‘emptiness’), and the father to the four lesser gods; Osiris, Seth, Isis, and Nephthys. In this context, Geb was believed to have originally been engaged with Nut and had to be separated from her by Shu, the god of the air. Consequently, in mythological depictions, Geb was shown as a man reclining, sometimes with his phallus still pointed towards Nut. Geb and Nut together formed the permanent boundary between the primeval waters and the newly created world.

His association with vegetation, healing, and sometimes with the underworld and royalty brought Geb the occasional interpretation that he was the husband of Renenutet, a minor goddess of the harvest and also the mythological caretaker of the young king in the shape of a cobra, who herself could also be regarded as the mother of Nehebkau, a primeval snake god associated with the underworld. He is also equated by classical authors as the Greek Titan Cronus.

Nut, also known by various other transcriptions, is the goddess of the sky, stars, cosmos, mothers, astronomy, and the universe in the ancient Egyptian religion. She was seen as a star-covered nude woman arching over the Earth, or as a cow. She was depicted wearing the water-pot sign that identifies her. Nut swallows the Sun, which travels through her body at night to be reborn at dawn.

Goddess of the sky

Nut is a daughter of Shu and Tefnut. Her brother and husband is Geb. She had four children; Osiris, Set, Isis, and Nephthys. She is considered one of the oldest deities among the Egyptian pantheon, with her origin being found in the creation story of Heliopolis. She was originally the goddess of the nighttime sky but eventually became referred to as simply the sky goddess. Her headdress was the hieroglyphic of part of her name, a pot, which may also symbolize the uterus. Mostly depicted in nude human form, Nut was also sometimes depicted in the form of a cow whose great body formed the sky and heavens, a sycamore tree, or as a giant sow, suckling many piglets.

Nut, goddess of sky supported by Shu the god of air, and the ram-headed Heh deities, while the earth god Geb reclines beneath.

Nut was the goddess of the sky and all heavenly bodies, a symbol of protecting the dead when they enter the afterlife. According to the Egyptians, during the day, the heavenly bodies such as the Sun and Moon would make their way across her body. Then, at dusk, they would be swallowed, pass through her belly during the night, and be reborn at dawn.

Nut is also the barrier separating the forces of chaos from the ordered cosmos in the world. She was pictured as a woman arched on her toes and fingertips over the Earth; her body portrayed as a star-filled sky. Nut’s fingers and toes were believed to touch the four cardinal points or directions of north, south, east, and west. 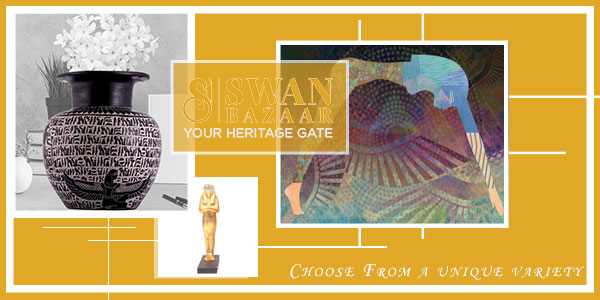 Geb and Nut against The Family Drama

Ptah and Ra, creator deities, usually begin the list of divine ancestors. Ra, the sun god, was the second to rule the world, according to the reign of the gods. He decreed, “Nut shall not give birth any day of the year.” At that time, the year was only 360 days. Nut spoke to Thoth, the god of wisdom, and he had a plan. Nut gambled with Khonsu, the god of the Moon, whose light rivaled that of Ra’s. Every time Khonsu lost, he had to give Nut some of his moonlight. Khonsu lost so many times that Nut had enough moonlight to make five extra days. Since these days were not part of the year, Nut could have her children. She had five children. When Ra found out, he was furious. Ra separated Geb and Nut  for eternity. Her father, Shu, was given the job to keep them apart. Nevertheless, Nut did not regret her decision. There is speculation between Shu and Geb and who was the first god-king of Egypt.

The story of how Shu, Geb, and Nut were separated in order to create the cosmos is now being interpreted in more human terms; exposing the hostility and sexual jealousy. Between the father-son jealousy and Shu rebelling against the divine order, Geb challenges Shu’s leadership. Geb takes Shu’s wife, Tefnut, as his chief queen, separating Shu from his sister-wife. Just as Shu had previously done to him. In the book of the Heavenly Cow, it is implied that Geb is the heir of the departing sun god. After Geb passed on the throne to Osiris, his son, he then took on the role of a judge in the Divine Tribunal of the gods.