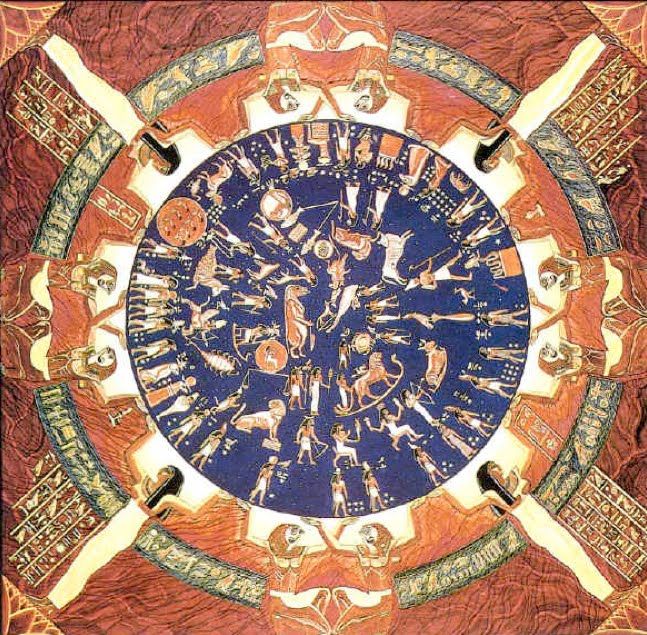 The Pharaonic Dendera calendar and The Zodiacs

The ancient Egyptian Dendera calendar was known as the solar calendar with three hundred and sixty-five days in a year. A solar calendar is a calendar whose date indicates the season based on the apparent position of the sun. The ancient Egyptian year consisted of three seasons, they were four months-long each, at the end of the year the five additional days were treated as outside of the year which was done in honor of the Egyptian gods. The life of the ancient Egyptian revolved around three seasons, which were, the Khet (the time of the flood), the second season was known as Peret (the time of growth), the third season was Shemu (the time of harvest). At the end of the thirtieth day of the twelfth month of the year began the five epagomenal days. These five special days were dedicated to the five children of the goddess Neith which were Osiris, Isis, Set, Horus, and Nephthys.

For much of Egyptian history, the months were not referred to by individual names but were rather numbered within the three seasons. As early as the Middle Kingdom, however, each month had its own name. These finally evolved into the New Kingdom months, which in turn gave rise to the Hellenized names that were used for chronology by Ptolemy in his Almagest and by others. Copernicus constructed his tables for the motion of the planets based on the Egyptian year because of its mathematical regularity. A convention of modern Egyptologists is to number the months consecutively using Roman numerals. A persistent problem of Egyptology has been that the festivals which give their names to the months occur in the next month. Gardiner proposed that an original calendar governed by the priests of Ra was supplanted by an improvement developed by the partisans of Thoth. Parker connected the discrepancy to his theories concerning the lunar calendar. Sethe, Weill, and Clagett proposed that the names expressed the idea that each month culminated in the festival beginning the next. The twelve months of yhe Dendera calendar are:

Brief History and Speculations of the Dendera Calendar

The current understanding of the earliest development of the Egyptian Dendera calendar remains speculative. A tablet from the reign of the First Dynasty pharaoh Djer was once thought to indicate that the Egyptians had already established a link between the heliacal rising of Sirius and the beginning of their year, but more recent analysis has questioned whether the tablet’s picture refers to Sirius at all. Similarly, based on the Palermo Stone, Alexander Scharff proposed that the Old Kingdom observed a 320-day year, but his theory has not been widely accepted. Some evidence suggests the early civil calendar had 360 days, although it might merely reflect the unusual status of the five epagomenal days as days “added on” to the proper year.

The three seasons the ancient Egyptian Dendera calendar revolved around:

As early as the reign of Djer (c. 3000 bc, Dynasty I), yearly records were being kept of the flood’s high-water mark. Otto E. Neugebauer noted that a 365-day year can be established by averaging a few decades of accurate observations of the Nile flood without any need for astronomical observations, although the great irregularity of the flood from year to year and the difficulty of maintaining a sufficiently accurate Nilometer and record in prehistoric Egypt has caused other scholars to doubt that it formed the basis for the Egyptian Dendera calendar.

Ancient Egyptian culture dates to well before the invention of the telescope, so only the five planets visible to the naked eye (Mercury, Venus, Mars, Jupiter, and Saturn) are relevant for it. What they knew about the planets and how they understood them is transmitted in texts and images that were discovered and translated since the 19th century by modern scholars. The process is still ongoing; several important sources for planets in Ancient Egypt are not yet published. In cases where the author has knowledge of important unpublished material, it is briefly mentioned here.

The Egyptians had a strong tendency to differentiate clearly between Sun and Moon, on the one hand (often called “the two luminaries”), and the five planets, on the other. At least for the late (demotic) phase of the Egyptian language, the term the (five) living stars is clearly attested as a specific term for the planets. It is uncertain if living stars also specifically designates the planets in the older periods during which this expression is not yet attested with the specific number five. Otherwise, it is difficult to pinpoint any Egyptian word for the planet; they may simply have been subsumed under stars. In one case, discs are perhaps used for the planets.

The zodiac is a planisphere or map of the stars on a plane projection, showing the 12 constellations of the zodiacal band forming 36 decans of ten days each, and the planets. These decans are groups of first-magnitude stars. These were used in the ancient Egyptian Dendera calendar, which was based on lunar cycles of around 30 days and on the heliacal rising of the star Sothis (Sirius).

The sky disc is centered on the north pole star, with Ursa Minor depicted as a jackal. An inner disc is composed of constellations showing the signs of the zodiac.

The sculptured Dendera calendar's zodiac (or Denderah zodiac) is a widely known Egyptian bas-relief from the ceiling of the pronaos (or portico) of a chapel dedicated to Osiris in the Hathor temple at Dendera, containing images of Taurus (the bull) and Libra (the scales). This chapel was begun in the late Ptolemaic period; its pronaos was added by the emperor Tiberius.

The Real Connotation of the Eye of Horus November 14, 2019
Latest