The Real Connotation of the Eye of Horus 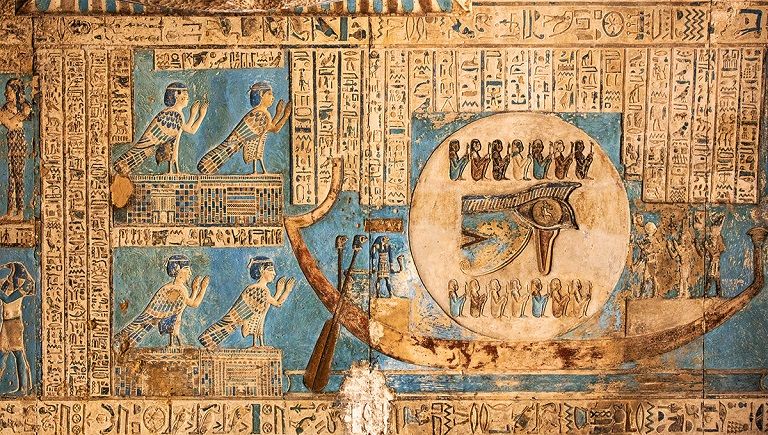 The Eye of Horus Story

Ancient Egypt is a gate of astonishment and magic. Once you enter the gate you are drawn into the mysterious myths and the surprising facts. They are the geniuses of all times; discovering facts that we are still trying to understand till our current time. One of the most stunning motifs of the Egyptian Myth is the Eye of Horus, for its various connotations. It is a symbol of protection, power, and hidden knowledge of being a mathematical base and a reference to the human senses.

God Ra with the Eye of Horus and the Ankh

The Drama story of the Eye of Horus

The Rise of the Son Revenging for his Father

Horus, the son of both Isis and Osiris, had grown to become the God of the Sky, related to Ra God who was the God of the sun. He was usually depicted as a falcon-headed on ancient Egyptian temples’ walls. Horus upon reaching adulthood thought to take revenge for his father from his uncle Seth. He fought him in a series of battles, and finally, he succeeded in killing him. However, during this struggle, Horus lost his left eye. There are two scenarios about how he lost it. One story says that his uncle, Seth, had ripped Horus Eye out and tore it into six parts, and throw it away. In another myth, it was believed that Horus himself gouged his eye out as a sacrifice to bring his dad back from the afterlife. Later on, Horus's eye was restored by either Hathor or Thoth (The Goddess of Wisdom).

The mathematical connotation of the Horus Eye

The Different Connotations of the Eye of Horus

Horus Eye has been an everlasting ancient Egyptian motif during all times. In the History lines, it was remarked as a symbol of protection, royal power, Good Health, and sometimes a symbol of illusion and knowledge. It is also known as the Wedjat or the wedjat eye of Horus or even it is mentioned in some contexts as the Egyptian Eye. Apart from the magical usage of the wedjat eye, it has a number of deep meanings that will absolutely surprise you.

The Mathematical Truth Hidden in the Eye of Horus

Firstly, the eye of Horus helped in the Ancient Egyptian acquisition of some mathematical knowledge. Depending on the myth that the eye of Horus was ripped into six parts, each part gave friction as a mathematical measure. The Right Side of the eye represents 1/2, the pupil is 1/4, the eyebrow is 1/8, the left side of the eye stands for 1/16, the curved tail is 1/32, and finally, the teardrop is 1/64.

Handmade Jewelry in the shape of Horus Eye