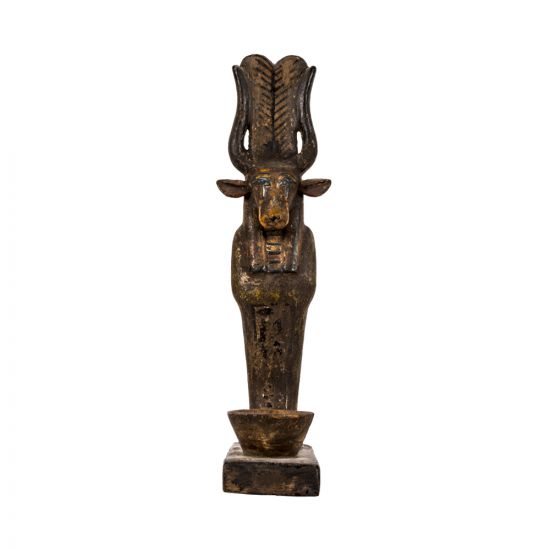 Be the first to review this product
$959.00
Availability: In stock
SKU
0009-WSB-TLB
Add to Wish List Add to Compare
Email
Details

The goddess Hathor is known as "The Great One of Many Names", such as "Celestial Cow", Lady of Gold", and "Mistress of Heaven". This handmade Hathor Statue is made by expert Egyptian artisans specialized in antiques. It is made with high precision to make it an exact replica of the original at the museum. Details were carved onto the wood, such as eye shape and crown, and the statue passed through a long treatment process to look exactly as if it was thousands of years old. It is a delicate piece that emphasizes the femininity of Hathor. The replica is 32 x 7 x 18 cm and weighs 100 gm.

Hathor is considered one of the most revered and holy gods in Ancient Egyptian mythology as she was the mother of the mighty god Horus and the sun god Ra, both of whom were directly attached to the kingship, thus, she was the symbolic mother of the pharaohs. Her calm yet endearing gaze is found commonly only art all throughout ancient Egypt

The Ancient Egyptians were polytheists but there were a handful of mighty gods that were held to a higher esteem and revered more fervently. The goddess Hathor was among these powerful gods. The worship of Hathor began around 3000 BC and many temples were erected in her honor.