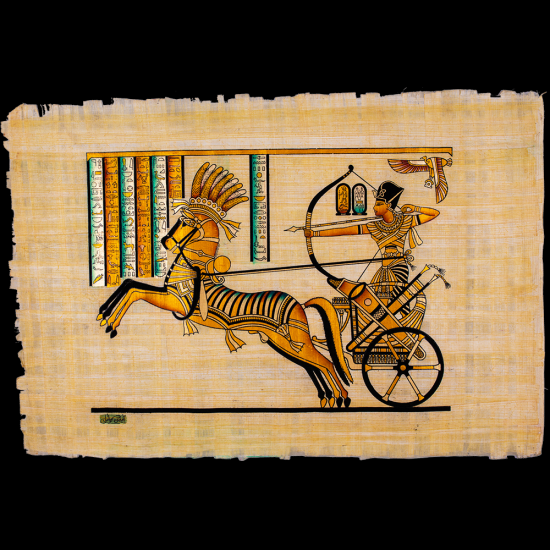 Be the first to review this product
$150.00
Availability: In stock
SKU
0005-RP-OCB
Add to Wish List Add to Compare
Email
Details

The scene refers depicted on the papyrus refers to king Ramses painting on Chariot at Battle of Kadesh. It was a major battle between the Egyptians under Ramses II and the Hittites under Muwatallis, in Syria, southwest of Ḥimṣ, on the Orontes River. Ramses II achieved a great victory over Muwatallis. However, it is remarked in the history as the first peace treaty in Ancient history. As a result of that treaty, the Hittites and Egyptians then entered into a new relationship with each other through which they shared their knowledge and experience. In the Kadesh battle, they started to adopt new war tools such as the horse, the Ourarit (chariot), and the composite bow which led to accuracy in wars and eventually the victory for the Egyptian army.

Handmade Royal papyrus painted in bright Color follows the same painting method of The Ancient Egyptians. It is cultivated in the shallow freshwater along the Nile. It takes the same process as the ancient Egyptians to produce a sheet from the thick reeds. Firstly, the thick reeds after harvesting are cut and the Yellowish- White inner pith is removed. Then, the layers of the reeds are cut into equal length strips. Next, the strips are laid side by side in two layers one upon the other at a right angle. After that, the pressure is applied to the layers for one week to produce white color paper and two weeks to produce dark color paper. Lastly, the sheet is rubbed with a piece of ivory to make the paper smooth and flexible.

The scene on the Papyrus is handmade painted by Egyptian artists. They use Gouache paint, which is the paint used by Ancient Egyptian artists. It is a combination of water and oil colors, which gives the scene a sense of originality and value. Gouache paint has a heavy and lovely texture that absorbs light rather than reflecting it, creating a very smooth appearance. This makes it ideal for opaque coverage.