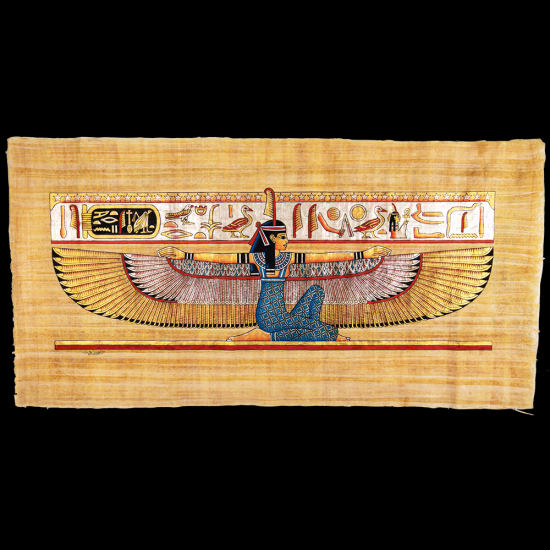 Royal Papyrus Embroidered Portrait of The Great Pyramids and Sphinx.

Royal Papyrus Portrait of Ramesses II coronation scene in the presence of Gods and Deities.

• Royal Handmade Egyptian Papyrus, dark-colored is cultivated by the Nile River shores, following the same process of Ancient Egyptian.
• Papyrus is a valuable plant that was used for many purposes such as hymns, religious texts, spiritual admonitions, letters, official documents, proclamations, love poems, medical texts, scientific or technical manuals, record-keeping, magical treatises, and literature.
• Talented Egyptian artists, using Gouache Paint, paint an artistic scene of Goddess Ma’at. It reflects all the details of the Goddess and her wings.
• The decoration of hieroglyphic letters and a cartouche of the Goddess name.
• Goddess Ma’at is the Goddess of justice, truth, and balance. She wears a Feather headed Crown, depicting balance and justice. She spreads her wings as she prevents any kind of immorality or chaos.

Goddess Ma’at outstretched wings scene, she is the Goddess of truth, Justice, and balance. She wears a feather crown that reflects her balance and justice. She spreads her wings as a sense of spreading morality and justice to the world. In the ancient Egyptian myth, Goddess Ma’at came to represent the concept of balance and order for the Egyptians at that time. She represents an ethical and moral principle. Her role was to avert chaos and speared morality. She was associated with the law in Ancient Egypt as a law base from the fifth dynasty (c. 2510-2370 BC).
In order to reflect the detailed scene, talented Egyptian artists painted the scene with royal rich gouache paint. Gouache paint refers back to ancient Egyptian artists. It is a mixture of oil and watercolor, creating a very smooth appearance and helping the papyrus to be rolled easily. It also absorbs the light reflection in case you will hang it as a portrait so that the scene will appear clearly in any lighting.
The papyrus is very valuable as writing material. Only kings and governments owned it and the Ancient Egyptian, as it was expensive due to the long process it takes to transform the rough reeds into writing sheets. Firstly, the reeds are cut into equal sized strips where was laid one laid over the other forming a layer. A second layer is laid at a left angle on the first layer. The pressure was applied on layers for one week. Then it is allowed to dry in sun and rubbed with smooth ivory to be flexible, strong and ready to use.