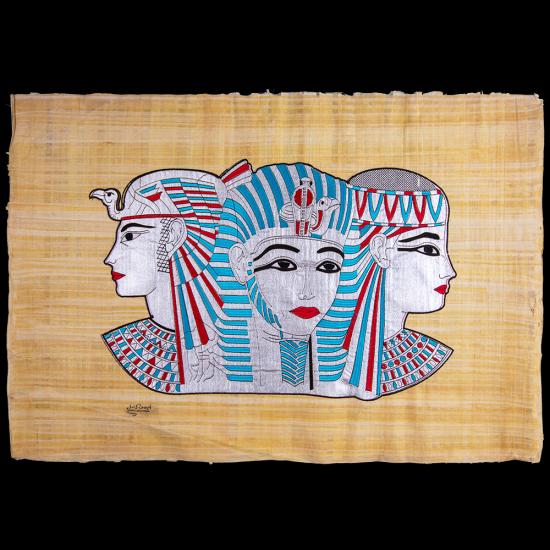 Royal Papyrus Portrait of The Key of life, Ankh in the Ancient Egyptian Language.

Three angels of the three most influential queens in Egyptian history: Queen Cleopatra, Queen Hathor, and Queen Nefertari. They are three icons in the history of Egypt for their strong and firm ruling period.
Queen Cleopatra on the right side, was born as the princess of Egypt because she was the daughter of Pharaoh Ptolemy XII. Cleopatra grew up as a smart and guiding girl as she was so close to her father and learned the ruling skills from her father. Cleopatra became the Egyptian ruler of Egypt after the death of her father, as her brother was younger than she was. Later on, she became the wife of Julius Caesar in 44 BC. During Cleopatra reigning period, the equality she gave to her people was a picture of Goddess Isis.

At the center, we can spot Queen Hathor, who was the Egyptian Goddess of Motherhood and love, as well as the Goddess of dance and music in the Egyptian myth. All Egyptians worshiped Hathor. In her temple, she is depicted as the “mistress of the west”, welcoming the dead to their eternal life.

Queen Nefertari on the left side was marked in history as the first wife and Queen of King Ramesses II. She had become the ruler of Egypt after King Ramesses II in the mid of the 14 century B.C. She was well known for her strong personality and her support for her husband during his succession.

High quality embroidered piece by silk threads is fully handcrafted by talented Egyptian hands. It is perfectly embroidered to reflect the tiny details of the historical scene and keep the lasting value of it as an everlasting sign of protection and safety.

This exclusive piece of papyrus refers back to more than 80 years old, and it is available only in one piece in our bazaar. It is handcrafted by our bazaar artist from 80 years ago, following the same process of turning the thick reeds into papyrus sheets, and ready for writing and drawing.