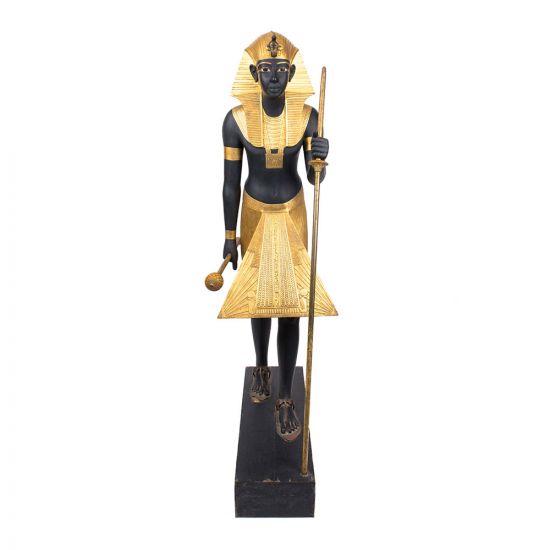 Replica of the Goddess of magic Serqet, Hand-crafted of Mahogany wood, Covered with Gold sheets with the touches of natural Gemstone obsidian

A replica for King Tutankhamun’s of original statue is made of master quality materials to be exactly like the original one. The statue itself is built with Mahogany wood. Mahogany wood features as strongest and hard kind of woods. It is also known for its beautiful colors and its ability to bear any kind of pressure. The body of the king is then painted with natural black colors. However, the hairdresser and the kilt of the king are covered with Gold sheets.

A historical figure of King Tutankhamun is very symbolic. The original statue was found standing in the doorway of Tutankhamen's tomb as guardians of the burial chamber in the Valley of the King’s. It was found with another pair of almost the same statue with slight changes. Both statues together represent the soul and spirit. One statue, the one is represented here, is wearing a “Nene” Hairdresser on it, Ureases that symbolizes authority and power. On the other hand, the second statue is wearing a “Khat” hairdresser.

The black body of the king is very meaningful and it has more than one explanation. In one myth, it is believed that his body is black in a depiction to God Osiris as God Osiris’ face was black. In this context, the black body of the king shows authenticity and power. In other stories, the black body of the King is a representation for the Richness and fertility of the slit that comes with Nile River overflow every year. Another belief is that Egyptian Ancient Kings were likely to depict the male statues with black color and female with the white color to show that women stay inside home most of the time.

Shop now King Tut statue for sale in a life-size same as the original statue size. Add a magnificent touch to your home, feeling the glory of the Ancient Egyptian history. It is to be placed in your home or in the doorway of your hotel. The statue sizes around 180” H, 97” W, 62” L.

Reviews 1
Write Your Own Review
Questions
No Questions, Please Post your Question