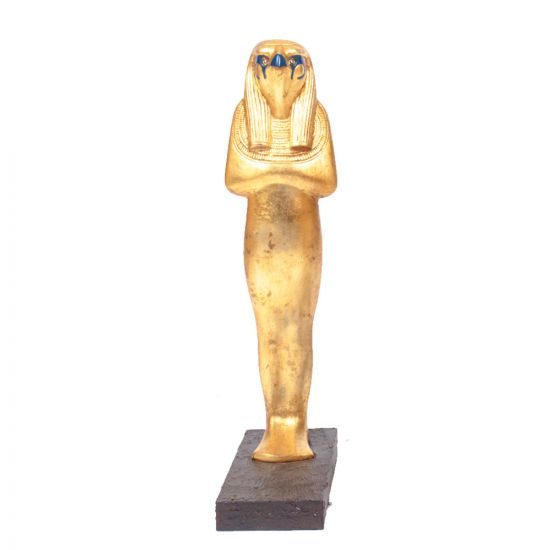 One of The Major Collection Of Egyptian Replica For Sale, God Ptah Statue, Handmade by talented Egyptian Artists

Horus Statue For Sale, the falcon-headed god, is built by professional craftsmen with master quality mahogany wood. Mahogany wood is featured by its hardness, beautiful and smooth texture. It is also very strong and unaffected with any pressure.

The statue base is covered with Gold sheets. The Eyes of the falcon and painted by professional Egyptian artists.

Shop now Horus statue for sale, the statue is typically made like the original one. So you will feel having an original piece between your hands. It is with a perfect size, medium size, you can add to any room of yours. It will take you back to civilization and history with its riyal taste.

Let’s get a glimpse about God Horus,

God Horus is the God of sky as recorded in ancient Egyptian history. He was depicted in most of the historical scenes that were found in temples and tombs as a falcon-headed god. As he carried the features of a falcon bird; such as, his being dominated protector, fast, fighter and powerful. God Horus was known in the history as the divine son of Isis and Osiris. After his father’s murder he went in a war against Seth and he recorded his victory and became the ruler of Egypt. During this war he lost his left eye. The eye was a powerful amulet. It was familiar as the Wedjat aye means the one eye. It was a symbolism for protection and power. The wedjat eye is one of the most meaningful motifs in ancient Egyptian myth. It was depicted in most of the scenes and drawings.

We found other products you might like!
Replica of the Goddess of magic Serqet, Hand-crafted of Mahogany wood, Covered with Gold sheets with the touches of natural Gemstone obsidian
Rating:
100%
1 Review
$1,500.00
One of The Major Collection Of Egyptian Replica For Sale, God Ptah Statue, Handmade by talented Egyptian Artists
$900.00
King Tut Replica of The Papyrus Statue, Handmade of Mahogany Wood in a Historical Hunting Scene, Fully Covered with Gold Sheets, Replica of The Original Statue
Rating:
100%
2 Reviews
$1,800.00
Iconic statue of Anubis Statue For Sale, Handmade of Master materials by Talented Egyptian Handcraftsmen
Rating:
90%
2 Reviews
$900.00