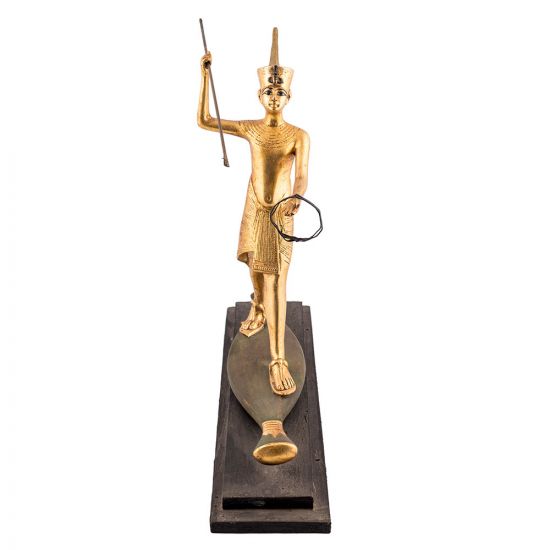 The legend of Tutankhamun captured imaginations globally when his tomb was unearthed by British explorer Howard Carter and financier Lord Carnarvon in 1922. The tomb’s antechambers were packed to the ceiling with more than 5,000 artifacts, including furniture, chariots, clothes, weapons and 130 of the lame king’s walking sticks.

The original statuette of Tutankhamun the Harpooner was found amongst the other treasures. This statue was found wrapped with two other statues of the king. The statue represents the daily life and routine of the king. We can see the king is wearing a red crown of Lower Egypt, standing on a green painted boat in a hunting pose. He is holding a harpoon in one hand as being ready to hunt his prey and on the other hand, he is holding a folded rope to be spread in order to blind the hunted animal.

Our statue is made using the same technique as the original. It is hand-carved from mahogany wood. Mahogany wood is well known for its hardness, strength and its ability to bear pressure. Then after the statue is built, it is covered with a gold sheet of shiny and high quality. As for the rope the king carries is made of original bronze. The boat on which the king stands is also made of mahogany wood and painted with light green paint. It is made in the shape of a folded papyrus flower with bow and stern. The statue follows the Amerna period of art that emerged in King Akhenaten reign. Thus, we can see the neck is stretched forward, the stomach is slightly swollen and the hips are low.