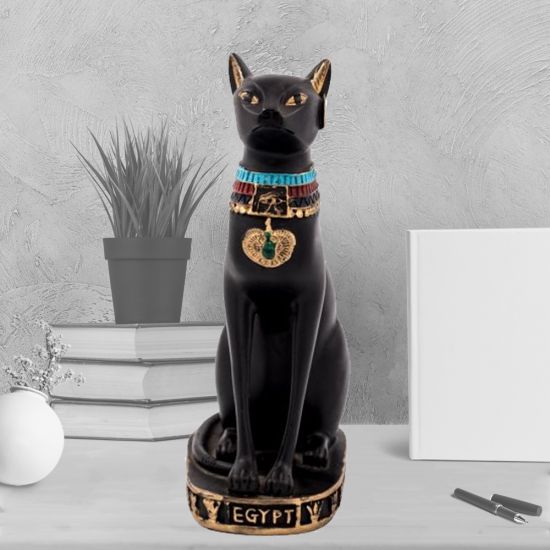 The ancient Egyptians adorned their homes as well as their temples, tombs and alters with similar statues, paying homage to the great goddess Bastet. It is hand-carved from traditional alabaster used by the ancient Egyptians. Alabaster was used for a variety of different items in Pharaonic times, from small vessels to carry perfumes, to burial items, to sculptures and tombs. It was a highly-versatile material due to its soft and easily malleable texture as well as its natural white color with natural colored veins.

This beautiful statue of the ancient Egyptian Goddess Bastet in her traditional cat form incorporates traditional pharaonic themes, symbols and motifs to magnify the brilliance and significance of Bastet.

Bastet is the goddess of protection. She was also the goddess of domesticity, women's secrets, cats, fertility, and childbirth. She protected the home from evil spirits and disease, especially diseases associated with women and children.

Here we see Bastet in her traditional cat form, with the eye of Ra. This is because she was one of the goddesses who was known as the "eye of Ra" or the "eye of Atum," the sun. She symbolized Ra's feminine counterpart and was sent out to take vengeance on his enemies. The "eye of Ra" was both a part of Ra and a separate being from him. She had life-giving, protective and also destructive capacities.